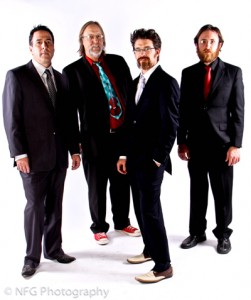 Every once in a while a band comes along that stands out amongst the crowded fields of the bluegrass world. The Blue Canyon Boys, a premier bluegrass band of the Rocky Mountain West, are one of those bands. Winners of the 2008 Telluride Bluegrass festival band contest, the Blue Canyon Boys have gone on to perform across the country and were selected to represent the United States and bluegrass music at the 14th annual Rainforest World Music Festival in Sarawak, Malaysia on the island of Borneo, which has consistently been rated in the top 25 International Festivals by Songlines Magazine. This bluegrass powerhouse consists of Gary Dark on mandolin, Jason Hicks on guitar, Drew Garrett on bass, and award-winning Chris Elliott on banjo. Blending incredible brother-duet-style vocals and hard-driving instrumental proficiency, this energetic band has created an infectious brew of hard-driving Colorado bluegrass. With four well received CDs that have garnered heavy airplay across the country and around the world, the Blue Canyon Boys have quickly become one of Colorado’s most celebrated bluegrass bands.

“With their tight instrumentation and some of the very best harmony I’ve ever heard, The Blue Canyon Boys really know how to please their audiences. I’ve seen them perform several times and I’ve never been disappointed.” – Doris Gray, President, Colorado Bluegrass Music Society

Sundays at Six is a free outdoor concert series in Cole Park, Alamosa. Concerts start at 6 p.m. Check out this year’s line up. In case of bad weather, go to ALMA’s website and Facebook page to find out about cancellations or change of venue.