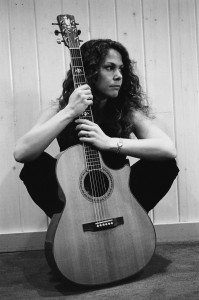 Sundays at Six returns June 24 to Alamosa! Enjoy free music throughout the summer presented to you by The Alamosa Live Music Association. Kicking off the season is singer-songwriter, Rebecca Folsom, bringing you acoustic rock and blues. See you at 6:00 p.m. at Cole Park!

While her range is impressive, it’s the expression in her voice that rivets your attention and stays with you long after the show ends.

Rebecca’s voice pours from an inner source of honest emotion, flowing from lilting tenderness to fully liberated, unbridled release. Her poetic songs open your heart, setting free a vulnerability you didn’t realize was locked away and inviting you to embrace life with all of its joy, sorrow, passion, and love. She brings both a pure vocal quality reminiscent of old Appalachia and a blues prowess.

With the release of two new CDs, Rebecca is in full stride, more masterful than ever and more personal too. Her newest CDs, Extraordinary Days and Little Medicines, born out of writing 52 new songs in a year, are a delightfully positive ensemble of songs. Mixed to listening perfection, the delicious blend of front porch instrumentals, intimate vocals, and soaring harmonies reveal tales of human heartbreak, redemption, and liberation. As Rebecca’s songwriting paints a picture of shadow and light, she digs down to gather life’s stories, alchemizes them, and offers a transcending, toe-tapping vision of hope. These songs are little medicines for the soul.

Within a few weeks of its release, Extraordinary Days hit number 5 on the national Folk DJ chart, while the song “Better Times” was named number 1 Best Folk song. Rebecca also earned the number 8 spot on Folk DJ’s list of top artists of 2016. The CD is Top 40 on National Americana Country radio charts, and the song “Colorado” hit number 22. National radio has called the CD “Stunning” and “Spectacular.”

Whether performing solo, or as a duo, trio, or the full band, Rebecca’s music lifts you up for a truly heart-opening and inspiring musical ride. Rebecca and her colleagues share many accomplishments, including Nashville songwriting success and a Grammy nomination, as well as topping the Roots/Americana and College radio charts, playing the highest caliber national and international venues, and being voted best of BBC television and radio. They have been professional singer/songwriters, touring musicians, and teachers for over 20 years.

Rebecca is a true renaissance woman. Beyond her career as a recording artist and national touring musician, she is a published author with two books of poetry. She is also an oil painter with a Bachelor of Fine Arts degree and has shown in numerous galleries.

Rebecca finds great joy in sharing her artistic experience through performing, songwriting, painting, and Art of Vocal Freedom workshops. Her genius is in helping people to open their hearts, to leap into what they really love, and to shine.

“I want to help people, in whatever form I can, break down barriers, to help people free themselves to live more openly, authentically, and with confidence that their dreams are possible and truly valued.”