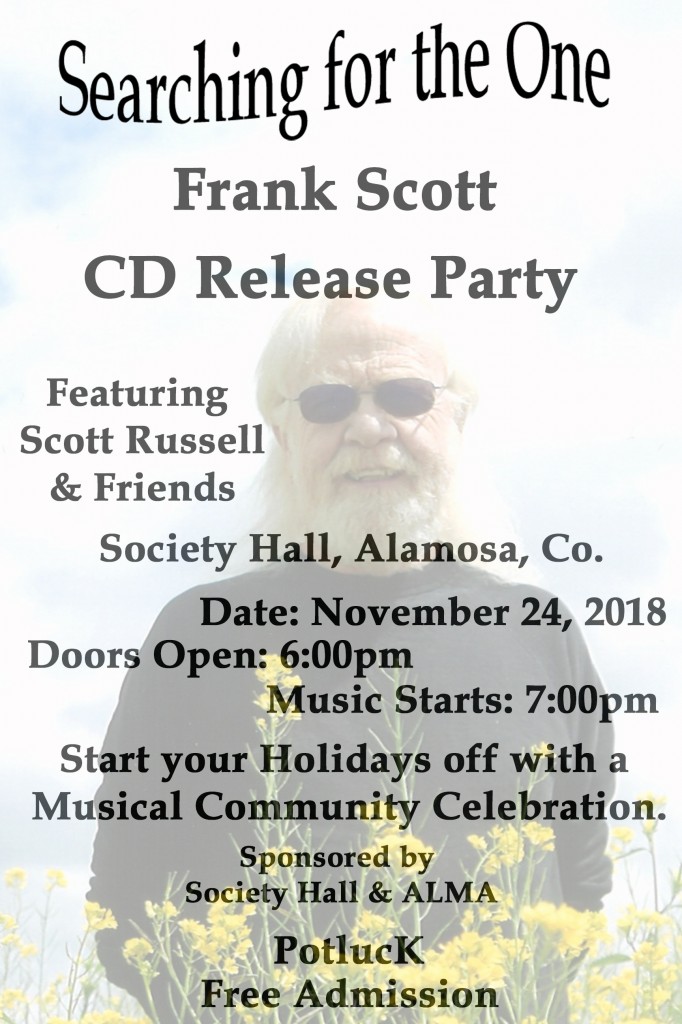 ALMA and Society Hall present Frank Scott, a CD Release Party, on Saturday, November 24. Frank and several local artists will be performing the songs from his new CD, “Searching for the One,” at Society Hall, 400 Ross Ave., Alamosa, CO 81101. Join us for this free concert and community potluck at 6:00 PM, with music starting at 7:00 PM.

Frank Scott was born and raised in New York City. Upon graduation from college, Frank hit the road for a few years, eventually landing in Alamosa in 1973. Frank still resides in Alamosa, where he raised his family. Frank helped form the Lucky La Rue Band in the early 90s with his friend and fellow educator, Fred Gonzales. The band had a large local following for over a dozen years and produced two well-received CDs. Heavily influenced by his Scottish background, Frank formed a Celtic group called Celtic Cross. This group morphed into the 40 Below Band, which can still play a night’s worth of Celtic music, as well as some Jazz, Rock, Country and originals.

Frank’s new CD, “Searching for the One,” offers a diverse set of original songs. Rock, Celtic, Latin, Bluegrass…all these influences can be found in this new release. There are a number of dynamic performances by many of our local musical heroes, too numerous to mention here. The artists will be joining Frank at the CD Release Party.