Sundays at Six presents You Knew Me When — August 19 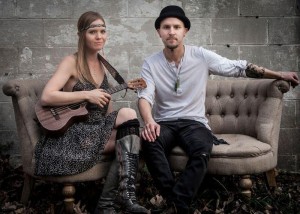 The Alamosa Live Music Association is pleased to present You Knew Me When at Sundays at Six, August 19, in Cole Park, Alamosa. Go to Leon Memorial Hall at ASU, in case of rain.

Outfitted with an array of instruments, You Knew Me When is a husband and wife indie folk-rock duo with a full-band sound. Based in Ouray, CO, by way of Nashville, TN, Cie and Karisa Hoover uprooted from their home and full-time jobs in June of 2012 and set plans to tour the nation for a full year…however, they never stopped. Since that time they have continued to tour full time, creating and serving up an array of craft-brewed compositions coast to coast, as well as releasing three studio albums, including their latest offering, “Into the Looking Glass.” The album is a culmination of mile-markers and moments derived from giving up everything and finding new paths together.

The Music of You Knew Me When parades between a fusion of progressive indie-rock and folk compositions all infused with a myriad of pulsing and stirring beats. WRNC Radio stated, “There is such a natural talent to You Know Me When and for the first time in quite a while it may be a sound that is truly unique, or at least different in these musical times.” While blending their vocals, Karisa, who previously served as a Nashville public school music teacher, provides the piano, ukulele, glockenspiel, and percussion. Cie, who spent several years as the Global Events Production Manager for Gibson Guitar, supplies the guitar and other rhythmic nuances. The cumulative result is a musical style that blends a singer-songwriter soul with a rock n’ roll mentality.

The foundations of You Knew Me When are rooted in Nashville, Tennessee, and while both Cie and Karisa originally went to Nashville to pursue various music endeavors, it took the husband and wife nearly a decade to create music together as a united pair. In their early years as a couple Cie could predominantly be found within the hard-rock scene, while Karisa could be found more often in vocal seminars and music education workshops, and it wasn’t until mid-2009 when the two began writing music together. It was from that point on that the two began melding their life partnership into the musical partnership known as You Knew Me When.