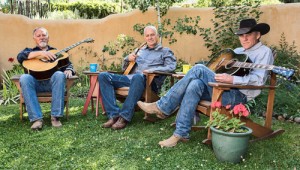 The Alamosa Live Music Association presents Don Richmond & The Rifters at Sundays at Six, August 27, in Cole Park, Alamosa. You won’t want to miss this final Sundays at Six concert for 2017!

The Rifters formed in 2002 in the fertile and creative music scene of Taos, New Mexico from members of two popular bands already active in the area. Jim Bradley and Don Richmond of Hired Hands, and Rod Taylor of the Rounders, who had all known one another for years playing in the acoustic dance-oriented Americana music scene of northern New Mexico, decided to join forces to form The Rifters. Putting out more music than it seems should be right for three guys on stage, the Rifters employ a wide range of acoustic and electric instruments, combined with soaring three-part harmonies, to provide a mesmerizing variety of music from driving blue-grama-grass to ethereal desert beauty. The years of playing to the dance crowds in their northern New Mexico homeland has given their music a toe-tapping rhythm that is engaging and undeniable. With a pedigree of bands like Hired Hands, the Rounders, and South by Southwest among them, the Rifters are truly a musical voice of their region of high desert vistas and mountain majesty.

And just what sort of music do The Rifters play? From the liner notes to their self-titled first CD, released in July of 2004 on Howlin’ Dog Records: “It’s music that comes from where we come from – both from the high desert and mountain landscape of our home and from the background and experiences of our lives – sort of a laid-back high-energy gentle giant old blue-buffalo-grama-grassy, cowboy, folky, shake-a-leg with a smile sort of thing. A rift is a split or a gap, sort of the like the Rio Grande Rift that we all live on or around. But this music is more about bridging gaps. For us the music is what ties all the different times and places together. We hope you enjoy it.”

The Rifters released their second CD, The Great River, in 2011 which has been enthusiastically received by fans, friends, and critics alike. It’s a collection of both original tunes and songs by other writers that the Rifters have put their own stamp on and made their own.

In May of 2013 the band released a live CD, titled Live at the Sagebrush, featuring songs recorded over a period of a year at one of their favorite haunts, the Sagebrush Inn in Taos, New Mexico. From the liner notes of the CD: “Three voices and three sets of hands playing various combinations of instruments form the sound of the Rifters, captured here just as it comes off the stages of the ‘clubs along the Sangre de Cristo,’ to quote an Eliza Gilkyson song. And for decades, the Sagebrush Inn in Taos, New Mexico has been a place where you could hear the southwestern folk-Americana music of northern New Mexico, and also a place where you could see the dancers that form such a part of the ecology of the vibrant area music scene. The Rifters have played there regularly since their formation in 2002 and for many years before in their former bands The Rounders and Hired Hands. We decided to record our shows at the Sagebrush through 2012 and early 2013 with the idea of releasing a live album that carries a hint of the energy that happens there.”