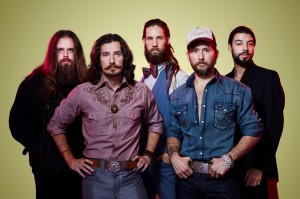 NOTICE: CHANGE OF VENUE DUE TO RAIN. THE GIVING TREE BAND WILL BE PERFORMING AT LEON MEMORIAL HALL, AT ADAMS STATE UNIVERSITY, AT 201 RICHARDSON AVE AT 6:00 PM ON SUNDAY, JULY 30.

The Alamosa Live Music Association happily continues its Sundays at Six series on July 30 in Cole Park, Alamosa with The Giving Tree Band.

If music is the universal language, then musicians are agents of unity and inclusivity. On FREQUENCY OF LOVE, the coming 5th studio album of The Giving Tree Band, much of their imaginative American rock ‘n roll manifests from lucid dreams.  With all their instruments calibrated to sacred tunings inspired by ancient mythologies of healing and miracles, the Illinois group’s new age outlaw sound opens the heart and invites the soul to dance. Loaded with tales of transcendent love and the adventures of warriors of the light, the positive vibrations sail out in all directions carrying the sweet message of harmony and optimism.

Formed in 2004 by enigmatic brothers E and Todd Fink, The Austin Chronicle explains the band’s sound as bringing to mind “Seventies American music with The Band and the Dead as obvious touchstones, plus the kind of country/almost-bluegrass of the Ozark Mountain Daredevils and the New Riders of the Purple Sage.” In 2010, Nashville Metromix called The Giving Tree Band “the American answer to Mumford and Sons.” In 2012, Relix Magazine wrote “the folksy bliss is the sound of a group playing as one” and featured the band as one of their monthly artists “On the Verge.” They’ve been the monthly “Player Spotlight” in Acoustic Guitar Magazine while multiple nods have come from Paste Magazine, including a #9 ranking on a list of “13 Emerging Bands For 2013” among other critical acclaim.

Over the past decade, The Giving Tree Band has had many unique opportunities to connect with all kinds of music lovers and grow a dedicated community of “Giving Tree-huggers.” During their November 3, 2008 appearance on WoodSongs Old-Time Radio Hour, host Michael Johnathon introduced them to a wide listening and television audience as having “the spirit of Pete Seeger with the musical abilities of The Band.”

In 2010, their third studio album, The Joke, The Threat, and The Obvious, climbed into the Top 40 of the Americana Airplay Chart and other roots radio reports.  They quickly became a promising folk rock act to many in the country world who could appreciate the outlaw and crossover stylings of some influences like Willie Nelson, Kris Kristofferson, The Byrds, Gram Parsons and Flying Burrito Brothers or The Eagles.

In February 2012, The Giving Tree Band shared their rendition of the Grateful Dead’s “Brown Eyed Women,” which led to features on all the Dead’s official sites and social media pages praising as “beautifully executed on all counts.”  The accompanying music video garnered millions of views and was screened at theaters nationwide during the Dead’s annual “Meetup at The Movies.”  The song itself was featured on The Giving Tree Band’s critically-acclaimed 4th studio album, Vacilador, and ranked #1 on The Austin Chronicle’s “Best Songs Of 2012” list.

When off the road, the members of GTB all reside at “Crooked Creek” – their home and studio outside Chicago.  There, they have meticulously honed their craft, devoting thousands of hours to practice, experimentation, and the development of a sound greater than the sum of its parts.  The Brothers Fink (E – guitars and lead vocals and Todd – banjos and lead vocals) are joined by longtime friend Norm Norman (mandolin, guitar, piano, organ and high harmonies) and the long-haired rhythm section of college roommates, Charlie Karls and “Z”, on bass and drums, respectively.

The Giving Tree Band is also known for extraordinary environmental stewardship and eco-friendly music production. They use a number of instruments that were handmade from naturally fallen trees and reclaimed woods. They have recorded with renewable energy and package all their CDs with 100% recycled materials. The band’s second full-length album, Great Possessions, was released on August 18, 2009.  It was recorded with 100% solar energy at the Aldo Leopold Legacy Center in Baraboo, WI.  During the recording session, the band camped in a nearby state park and commuted over 500 miles by bicycle. The Chicago Sun-Times has called Great Possessions the “greenest of albums.” National and international environmental media, such as The Sierra Club, The Discovery Channel and Mother Earth News, have also highlighted the band’s activism, with the latter referring to them as “the greenest band in the land.”