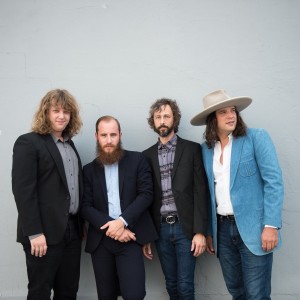 The Alamosa Live Music Association continues its Sundays at Six series on July 23 in Cole Park, Alamosa with Cordovas. The country-rock group is committed to the sound of brotherhood – a few voices sharing a feeling. See you at 6:00 p.m.!

Their new album, That Santa Fe Channel, set for an August release, has gained attention from NPR Music, who included Cordovas’ single “I’m The One Who Needs You Tonight” in their “Songs We Love” series. Rolling Stone Country has named the band a “New Country Artist You Need To Know.”

Produced by Kenneth Pattengale of The Milk Carton Kids, the album initially took shape when the band decamped in Todos Santos, MX for a month of rehearsals and songwriting. The album was recorded live at Electric Kite Studios in Madison, TN.

Already cult favorites in Nashville, Cordovas have built honorary home bases across the globe, thanks to recurring shows in Todos Santos, Mexico – where ringleader Joe Firstman runs the yearly Tropic of Cancer Concert Series – and a touring schedule that recently including headlining gigs in Sweden and a stateside run alongside the Turnpike Troubadours. The band’s sound, though, is decidedly American. Caught halfway between Duane Allman’s Telecaster twang, the Dead’s hazy harmonies and the stoned swoon of California’s folk-rock heyday, Cordovas wring new life from older influences, hoisting their freak flag high on their upcoming album, That Santa Fe Channel.