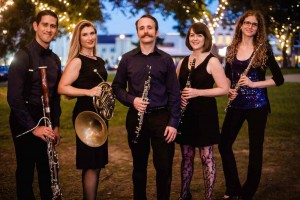 The Madera Wind Quintet will give a concert at Leon Memorial Hall at 7:00 p.m. on Wednesday, November 16th.  The recital features works by Latin American and South American composers along with quintet standards and selections by Sean Friar and Don Gillis from the group’s albums Five as Play (Crescent Phase Records, 2012) and Five Piece Combo (Ravello Records, 2015).  This concert is part of the Madera’s four day residency at Adams. In addition to the Wednesday recital, the group will present master classes, chamber music coaching, lessons, round table discussions, as well as a new work for solo woodwind quintet and band, El Ranchero, composed by David Pierce. The new work by David Pierce was commissioned by Adams State University along with several other works for soloists and band by composers including Jack Stamp and Jennifer Bellor. Adams State Winds and Percussion will record each composition this academic year, and then perform the works on January 26, 2017 at the Colorado Music Educators Association conference in Colorado Springs. This initiative is part of the Adams State University ETHOS project, which explores equity and diversity through music curriculum and programming. The works reflect the heritage, culture, and geography of the San Luis Valley, home to Adams State in Alamosa, Colorado.