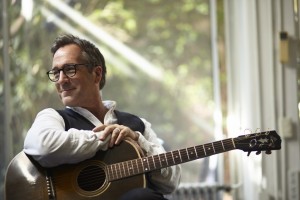 The Alamosa Live Music Association presents Richard Shindell on Sunday, October 23 at 7:00 p.m. at Society Hall, on 4th and Ross, in Alamosa.

An expatriate New Yorker now living in Argentina, Richard Shindell is a meticulous craftsman of song whose recordings have been revered by critics and fans alike. Shindell is currently on tour in support of “Tomorrow You’re Going,” a collection of cover songs under the band name The Pine Hill Project, with Lucy Kaplansky and produced by Larry Campbell. Shindell will release a solo collection of original songs in 2016. Meanwhile, he’s launched a YouTube channel where, from an apartment in Buenos Aires, he is recording his entire repertoire of compositions, revisiting his earliest works with a bold intimacy. Shindell is increasingly playing his electric ’53 Fender Esquire, moving into a more complex and open sound, while maintaining his focus on smart, passionate storytelling. Innovative, original and occasionally spiritual, Shindell’s songs weave tales that interchangeably champion the downtrodden, exalt the disaffected or wax empathetic to those lost to society’s fringes. As a feminist, he often composes from, and is inspired by, a woman’s point of view. Shindell’s songwriting ranges from lighthearted ballads and adulterous love songs, to dirges and diatribes that skillfully skewer politics, prejudice, war and religion, to the comic point-of-view of a cow stuck in a barbed wire fence. He has a unique ability to morph into the soul of the many and varied personalities he casts as narrators in certain songs—songs that are veritable novellas framed in haunting acoustic melodies. Shindell has lived in a Zen Buddhist monastery, busked in the streets of Paris, opened for Joan Baez (who continues to cover his songs), and collaborated with Grammy-winner Larry Campbell (Bob Dylan, Levon Helm, Elvis Costello). The Pine Hill Project’s album “Tomorrow You’re Going” was crowdfunded by an extraordinarily successful campaign that met its goal within 24 hours and ultimately raised over $85,000.

The concert will begin at 7:00 PM, with the doors opening at 6:00 PM. Tickets may be purchased at the Green Spot and Narrow Gauge Newsstand, or by going online to www.societyhall.org. Or click here for tickets. $15 general admission/$13 ALMA members/$10 seniors, students, community volunteers.

This concert is sponsored in part by the Xcel Energy Foundation, as well as Comfort Inn & Suites in Alamosa.