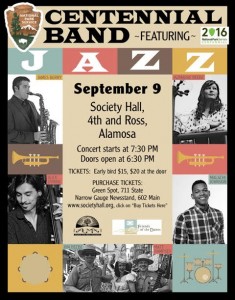 The Alamosa Live Music Association and The Friends of the Sand Dunes present The Centennial Band on Friday, September 9 at 7:30 p.m. at Society Hall, on 4th and Ross, in Alamosa. As the continuation of the 100th anniversary of the National Park Service, and preparing for the next 100 years, the New Orleans Jazz National Historical Park is touring the Centennial Band, which performs Traditional New Orleans Jazz and R&B.

The New Orleans Jazz National Historical Park’s mission is to serve the nation as a global leader in the promulgation of New Orleans jazz by enhancing and instilling a public appreciation and understanding of the origins, early history, development and progression of this uniquely American music art form – jazz.  The New Orleans Jazz National Historical Park is managed by the National Park Service and tells the story of the people and places that helped shape the birth and development of jazz music in New Orleans. The Centennial Band is comprised of active, retired or former Park Rangers as well as Park Volunteers and Interns.

The concert will begin at 7:30 PM, with the doors opening at 6:30PM. Tickets may be purchased at the Green Spot and Narrow Gauge Newsstand, or by going online to www.societyhall.org.

This concert is sponsored in part by the Kenneth King Foundation, as well as Comfort Inn & Suites in Alamosa.