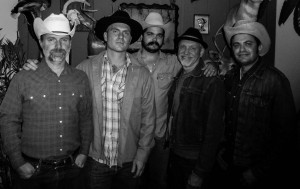 The Alamosa Live Music Association presents Western Centuries on July 10th, as Sundays at Six continues in Cole Park, Alamosa. Round up a country band and an early R&B group with three lead vocalists, weave in a hefty amount of vocal harmony and witty turns-of-phrase, and let ‘em rock out like The Band. The sound of roots music mavericks Western Centuries sits at these crossroads, and their debut album Weight of the World introduces a band as skillful in their musicianship as they are innovative in their writing. With upbeat, barroom dance numbers, lilting, introspective tunes of heartbreak, and everything in between, the album strikes an oft-strived-for but rarely achieved balance between genre-busting experimentation and thoughtful continuity.

Comprised of Seattle-based country musician Cahalen Morrison, jam band veteran Jim Miller (co-founder of Donna the Buffalo), R&B and bluegrass-by-way-of-punk rock songwriter Ethan Lawton, pedal steel player Rusty Blake, and bassist Dan Lowinger, Western Centuries are clearly a diverse bunch. The band is collaborative in nature, but they are – albeit subtly – helmed by Morrison. After years of performing in prominent roots duo Cahalen Morrison & Eli West (whose music made fans of Tim O’Brien, Jim Lauderdale, Dirk Powell, and BBC Radio’s Bob Harris along the way), Morrison formed and led the band Country Hammer, made up of members who have mostly crossed over into Western Centuries.

Produced by Bill Reynolds (Band of Horses) and recorded in his Nashville studio, Weight of the World features three different songwriters and lead vocalists (Morrison, Miller, and Lawton); the result is a sound that deftly defies neat categorization. Yet the album doesn’t come off as scattered. Instead, it feels like the natural confluence of the band’s wide-ranging influences, laced together by the interconnected histories of the musical styles at its foundation, and by its writers’ commitments to imaginative songwriting.

Upon first listen, Weight of the World provides all the familiar satisfaction of traditional country lyricism – rife with simultaneously hilarious and heart-breaking one-liners, tales of hitting the bottle and scraping bottom, and so on – but these songs yield new and deeper meaning with every listen. Each songwriter brings his own flair to Weight of the World, but there is a deeply literary approach to the songwriting woven throughout. The metaphors cleverly extend on, sometimes for an entire song as with Lawton’s “Off the Shelf” — a love song written for a bottle of booze.

While its lyrics are impressively layered with meaning, Weight of the World will appeal to just about any fan of roots music; the album certainly showcases the band’s great range and ability to blend influences ranging from early rhythm and blues, all the way to straight up country. But it’s also marked with a profound ingenuity – the type that feels instinctual rather than intentionally labored for, the kind that continues to flourish and snake into new realms as time wears on. This is just the beginning for Western Centuries, and it’s not likely their creative well is going to dry up any time soon.

Western Centuries will release Weight of the World via Free Dirt Records on June 3, 2016, and will tour the USA this summer and fall in support of their new release. For more information on Western Centuries, visit their website, http://www.westerncenturies.com/.