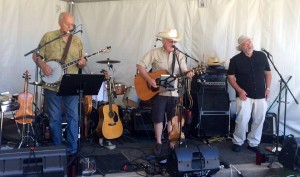 The Alamosa Live Music Association presents The Richmond Brothers on July 31st, as Sundays at Six continues in Cole Park, Alamosa. The brothers – Don, Ed, and Jim Richmond – will be releasing their latest collaborative project, their CD, “Seems Like Only Yesterday,” at Cole Park this Sunday. The CD came about as a “family thing,” so friends and family would have a record of the brothers’ musical abilities. Join us for a rousing concert!

The Richmond Brothers grew up surrounded by music. Their mother Anne McIsaac and father Ed Richmond were both professional singers in the Chicago music scene of the late 1930s and early 1940s before marrying and eventually settling in Alamosa. Father Ed Richmond taught vocal music at ASU and the kids were expected to participate in choir and/or band throughout their school years.

Music stuck for youngest son, Don Richmond. Don has made a career right here in Alamosa, performing with his early bands from the age of 15 including his 17-year tenure with Tumbleweed, and on into his current band the Rifters. In addition, Don established a recording studio in 1990 and about two years ago started a record label, Howlin’ Dog Records, with partners David Clemmer, Jana Pochop, and Don’s wife, Teri McCartney.

Jim has played professionally for all of his adult life as well. Many Alamosans will remember his popular band, the Tennessee Hat Band. When the band split up, Jim earned his teaching certificate in physics and just recently retired from a distinguished teaching career. But Jim never quit playing and has performed as a multi-instrumentalist with many Texas troubadours such as David Allen Coe, Rusty Weir, Ray Wylie Hubbard, Jack Ingram, and Tommy Alverson. He continues his musical career with his popular Ft. Worth, TX, band, Three Fools on Three Stools.

The middle brother, Ed Richmond, chose a different path career wise, but has just as beautiful a voice and just as much a love for music as his musical brothers. Ed recently retired from his work in high tech manufacturing and computer network administration. Fans will remember his beautiful voice on the first Richmond Brothers release, “Roots and Branches.”