Sundays at Six Starts this Week! 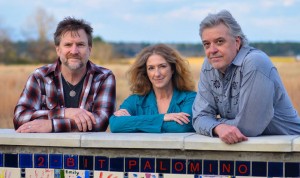 Sundays at Six kicks off on June 28th with new comers 2-Bit Palomino. Hailing from Houston, 2-Bit Palomino is Singer/Songwriters Andi Renfree, Ren Renfree and Bill Ward. Founded in March of 2010, 2BP (as their fans call them) have made huge strides and are quickly becoming a household name in Texas Music, and across the country. 2-Bit Palomino is the 2011 and 2013 recipient of the Vocal Group of the Year award from the Academy of Texas Music.

The trio recently signed with local musician/engineer, Don Richmond’s record company, Howlin’ Dog Records to release their third studio album titled “Things I Dream About”.  The new CD is a collection of beautifully written songs that will take you on a melodic journey highlighted by the groups award-winning harmonies.

Sundays at Six is a free outdoor concert series in Cole Park, Alamosa. Concerts start at 6 p.m. Check out this year’s line up. In case of bad weather, go to ALMA’s website and facebook page to find out about cancellations or change of venue.