Get back into the rhythm with Jaka! 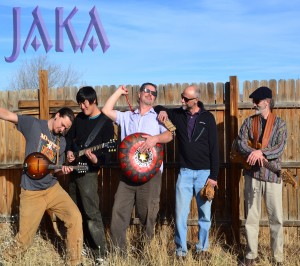 Afro Pop/Funk band, Jaka perform August 10th for Sundays at Six, in Cole Park, Alamosa.   Jaka is a World beat dance band based in Santa Fe. Described as Funk-Rock meets Afro Pop, the group has a driving percussive sound with bright sounding memories. Jaka’s live show is a joyful and energy-packed event that brings any audience to its feet, be it for ecstatic or standing ovations. The band’s polyrhythmic, exciting sound is a rich brew of ancient mbira traditions of Zimbabwe and the joyous sounds of South African party music, spiced with funk, played on beautiful homemade marimbas at incredible speeds.

Sneak Preview! Get into the Rhythm – head over to Jaka’s website and do some pre-listening.

Sundays at Six is a free outdoor concert series in Cole Park, Alamosa. Concerts start at 6 p.m. Check out this year’s line up. In case of bad weather, go to ALMA’s website and facebook page to find out about cancellations or change of venue.