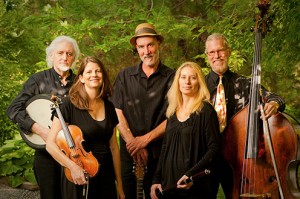 The Music Department at Adams State University and ALMA are excited to present a workshop and concert by Celtic group Colcannon on Friday, March 7 at ASU.

If you play a Celtic instrument, here’s your chance to refine your musical skills while learning from some of the best Celtic artists in Colorado! The workshop is FREE and open to the public.

Come out to hear a great evening of Celtic music! Tickets are $15 for adults and $10 for students/seniors. Available at the Adams State Music Office, the Green Spot, located in Alamosa and All Good Things, located in Monte Vista. For more information, please contact 719-587-7621.

Colcannon presents timeless songs that  transports the audience to another time and place. They perform Irish music with panache, warmth and wit.  Formed in 1984 in Boulder, the band includes members Mick Bolger, Mike Fitzmaurice, Jean Bolger, Brian Mullins, and Cynthia Jaffe. Together they have developed a distinctive, inventive, and contemporary musical style while still keeping in firm touch with the heart and essence of traditional Irish music.

The band’s recent CD ‘The Pooka and the Fiddler’ received a Parent’s Choice Award for its artful interweaving or music and storytelling. The Emmy®-award winning PBS special, “Colcannon in Concert,” filmed at the Denver Center for the Performing Arts has aired nationwide. Colcannon has also been part of many collaborative projects — they were featured on John McEuen’s soundtrack for the television mini-series “The Wild West”, as well as on the Western Heritage Award winning album of the same name and The Nashville Network Television special “The Music of the Wild West”. The group has provided music for an audio project “Secrets of the World — The Good People” featuring Irish master storyteller and folklorist Eddie Lenihan.

Colcannon’s appeal crosses lines of age, gender and ethnic background. For while the musical focus is on the beautiful wealth of traditional Irish music — all acoustic instrumentation, traditional as well as original tunes and songs, with some of the songs in Mick’s native Irish language — Colcannon’s true message is the story of the resilient and joyous human spirit.

Check out this video with a short introduction to Colcannon: http://www.colcannon.com/videos