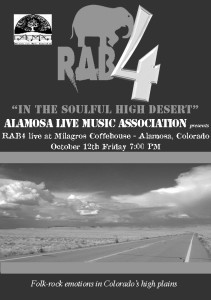 Even though they’re from Italy, it’s the great American melting pot of music that gives different overtones to the quartet RAB4. As part of their southwestern U.S. tour, RAB4 brings their folk-rock emotions to the soulful high desert of Alamosa, Colo., at Milagros Coffeehouse, on the corner of State Ave. and Main St., Fri., Oct. 12 at 7pm.

RAB4 honed their skills during years of gigging in Italy and abroad, in countries including the USA, Germany, Switzerland, Belgium, Holland and Iceland. Rock’n’roll, R&B, folk and blues are deeply rooted in this quartet’s DNA, but the band has found an unique, personal take on these styles.

RAB4’s repertoire, a mixture of American classics and originals in English, displays intimate and almost totally acoustic moments as well as raw, rock-blues sounds and grooves. The band is made up of talented veterans of the European rock scene, playing the classic rock instrumental line-up of two guitars, bass and drums, with vocals.

Admission is a suggested donation of $5 and an item for the SLV Food Banks, but no one will be turned away from the show.