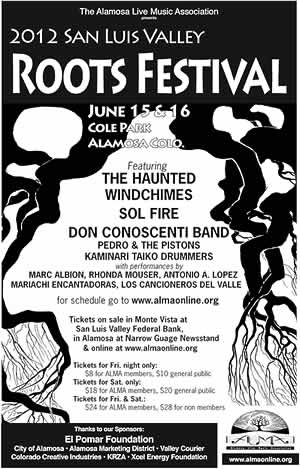 Music ranging from Latin rock to vintage-sounding Americana and folk to Mariachi to Taiko to classic rock and more will fill the air around Cole Park in Alamosa, Col., June 15 and June 16 as the Alamosa Live Music Association (ALMA) presents the inaugural San Luis Valley Roots Festival.

“It is time we bring together our incredible diversity in a celebration,” ALMA board president Julie Mordecai said. “We are lucky to live where the Southwest meets the Rocky Mountains, where western music is woven into the lives of the cowboys, and an incredible diversity of Spanish language music is sung,” she added. The festival is also scheduled to coordinate with the Rollin’ Deep Car Show, on Fathers’ Day, Sun., June 17, to give visitors a full weekend of events, according to Mordecai.

Sol Fire, led by brothers Amado and Buddy Abeyta, will kick off the festival at 7pm on Fri., June 15. They are known for a unique sound that merges rock with pop, r&b and Latin influences. Since their founding in 2002, Sol Fire has become a household name in Santa Fe and New Mexico. They have shared the stage with a wide variety of folks, including Ozomatli, the English Beat, Yerba Buena, the Iguanas, Groupo Fantasma, Quetzal, Los Lobos, Everclear, Blues Traveler, War, comedians George Lopez and Paul Rodriquez, President Clinton and then-candidate Barack Obama.

The Japanese style drums of Crestone’s Kaminari Taiko will thunder and whisper to kick off Saturday’s festivities at noon. Mariachi Encantadoras is a highly regarded group of young female musicians from northern New Mexico that plays everything from traditional sones to classical works and popurrís, and they are on the schedule at 2pm.

Pedro and the Pistons are not only a classic rock cover band, but they have begun performing their own music, a mix of country, rock, reggae, funk, and some Latin fills, and they take the stage at 4pm. The Don Conoscenti Band brings their soulful fusion of rock, jazz, blues, folk, funk, and country from Taos at 6 pm.

The Haunted Windchimes‘ sound draws from traditional folk and American roots music, and they will close out the festival starting at 8pm. Desirae Garcia, Chela Lujan and Inaiah Lujan of the Windchimes have SLV connections, and their honeyed harmonies and spirited pickin’ lie between bluegrass, blues, and country, and bring those styles together to create something new, yet vintage-sounding. Multi-instrumentalist Mike Clark and standup bassist Sean Fanning round out the group.

As of 10:45am, Saturday, June 16, on-line ticket sales are over. Please purchase your admission at the gate, at the southeast corner of the baseball field at Cole Park.