Trio from Taos Chamber Group to Perform in Alamosa 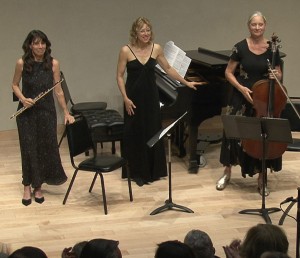 Playing works by Prokofiev, Debussy, and others, a trio from the Taos Chamber Music Group will present a concert sponsored by the Alamosa Live Music Association (ALMA), Sat. March 3, 6pm, in Leon Hall, near 2nd St. and Richardson Ave. on the Adams State College campus in Alamosa.

Cellist Sally Guenther received her Bachelor’s degree at Indiana University where she studied with Janos Starker, and a Master’s degree at The Julliard School of Music, studying with Harvey Shapiro. She also attended the Taos School of Music, Music Academy of the West and International Congress of Strings. After engagements with several US orchestras, including with the Cincinnati, Fort Worth and Syracuse symphonies (as principal cellist), and the Metropolitan Opera Orchestra, she became solo cellist of the Bergen Philharmonic Orchestra in Norway, a position she held for twenty years.

Flutist Nancy Laupheimer founded the Taos Chamber Music Group in 1993 and serves as its Artistic and Executive Director. She has played flute, alto flute and piccolo with the Santa Fe Symphony, Musica de Camera Orchestra, Santa Fe Festival Ballet, Desert Chorale, New Mexico Music Festival, Serenata of Santa Fe, Music from Angel Fire, the Dorian Wind Quintet, and the American and Helios String Quartets. Other chamber music collaborations have included concerts on the Dolores and Green Rivers with members of the Los Angeles Philharmonic. Laupheimer has recently been named a Remarkable Woman of Taos.

Tickets for the show are $10 for ALMA members, $12 for the general public, $5 for students, seniors, full-time volunteers and active duty military with proper identification. Advance tickets are now available at the Narrow Gauge Bookstore, on the corner of State and Main in Alamosa, and the Adams State College Music Department office on campus.