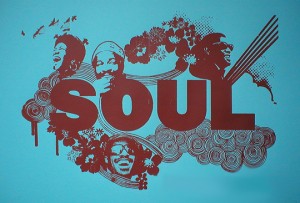 With a growing audience in the Santa Fe / Albuquerque area, Soul Foundation is a five member band which plays a large variety of music well suited to diverse audiences, and they will be concentrating on classic style soul, funk and rhythm and blues when they play in Cole Park for the Alamosa Live Music Association’s “Sundays at Six,” series on Sun., Aug. 21 at 6p.m.

Lead vocalist Jimmy Russell is an international performer whose career includes performances with Prince, the Fabulous Thunderbirds, and T-Bone Burnett (who worked with the Coen Brothers on the soundtrack to “Oh Brother, Where Art Thou?” and won both a Grammy Award and an Academy Award for a song he wrote for the Jeff Bridges film “Crazy Heart,”) among others.

Brian de la Fe is a master conga player who is originally from Cuba and grew up in Albuquerque.

Andy Kingston is on keyboard and is a professor of music and other studies at St. John’s College in Santa Fe. He is originally from the Boston area.

Diego Maestas is the band’s co-founder and serves as drummer and Afro-Cuban based percussionist.

Soul Foundation also offers Latin music styles; including salsa and Latin jazz, which they will play during Adams State College’s ASC Block Party, which runs from 7pm until 11pm Sat., Aug. 20, at Rex Field on the college’s campus.

In the event of inclement weather, 2011 “Sundays at Six,” concerts will take place in Richardson Hall, on Edgerton Ave. near Main St. on the Adams State College campus.

ALMA also helps present music at the Valley Farmers’ Market in downtown Alamosa, and Los Cancioneros del Valle, otherwise known as Rose Vialpondo and Salomon Lopez celebrate their recently released CD by playing “ la música de la gente,” traditional Spanish, country, folk, and pop at the Valley Farmers’ Market in downtown Alamosa this Sat., Aug. 20, from 10am until noon in the parking lot near Centennial Park near the northeast corner of State Ave. and Main St., between Main St. and 6th St. and between State Ave. and Hunt Ave. in Alamosa.