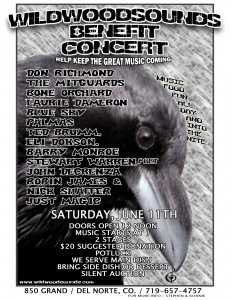 For nine years, Wildwoodsounds House Concert Venue, 850 Grand Ave., on the north side between Cherry and Oak in Del Norte, has been presenting music by everybody from those with international reputations to folks from the San Luis Valley and northern New Mexico. While that effort has brought many smiling faces and good memories, it has not brought in much income. So now Wildwoodsounds is hosting some of the finest musicians from Colorado and New Mexico in order to “Help Keep the Music Coming,” Sat., June 11, with doors opening at noon, and music starting at 1pm.

“We feel that every community should have the opportunity to experience …talented writers and performers, and to hear the voices of beautiful souls who make this world a better place with their music,” Wildwoodsounds co-founder Steve Crawford said. “Every concert takes us on a musical journey through landscapes, visions, dances, grooves, styles, emotions, laughs and tears,” he added.

Crawford and his wife, Konnie, founded the venue in 2002 in order to share the joy and love they feel from sharing music. Since then, they have presented concerts from local as well as national and international artists in genres including jazz, bluegrass, country, folk, blues, Americana , classical, African, European, gypsy, Australian, middle eastern, rock-n-roll, Celtic and Brazilian.

Well-respected performers are coming from around the SLV, Taos , Colorado Springs and Boulder to donate their talents for the June 11 benefit, including Don Richmond, the Mitguards, Bone Orchard, Laurie Dameron, Blue Sky, Palmas, Stewart Warren, John Decrenza, Robin James & Nick Shaffer, Just Magic and Maya Muse. There is a $20 suggested donation. Wildwoodsounds will provide a main course, and they ask attendees to continue their tradition of “sweetie/snacky potluck,” by bringing a side dish or desert to share. Music will be going non-stop from two stages both with great acoustics.

More information is available at http://www.wildwoodsounds.com or call 719-657-4767. Wildwoodsounds is preparing to apply for 501(c)(3) non-profit status through the North American Music and Dance Alliance. The Alamosa Live Music Association invites everybody to come out and have fun while helping support Wildwoodsounds.

Richmond is a multi-talented Alamosa musician who’s followed up his recent solo album, “Like Lazarus,” with a brand-new CD, “The Great River,” from his band, the Rifters. The Mitguards, from Colorado Springs, bring a unique and non-traditional perspective to folk and Americana music. One reviewer called Bone Orchard’s music “somewhere between alt-country and Gothic Americana.” Dameron is a singer, songwriter and guitarist who blends jazz with her folk songs.

Palmas, specialize in flamenco and other Latin music styles. Warren is an incredible poet and storyteller who called Del Norte home for a time. James blows people away with her soulful vocals and uncommon versatility in pop, folk, alternative country, and alternative rock. Just Magic, (Stephen and Konnie) plays acoustic folk rock, music mostly of the valley. Maya Muse adds her soulful voice to round out the day.