The weekend closest to St. Patrick’s Day brings a full keg of musical talent to the San Luis Valley with the help of the Alamosa Live Music Association (ALMA). Called “A riveting artist” by the Washington Post, Aaron Larget-Caplan rides the razor’s edge of classical guitar, and he is scheduled to play Sat., March 19, 6pm, at Adams State College’s Leon Memorial Hall, on Richardson Ave. near 2nd St. in Alamosa. Celtic band FEAST will present an exciting Irish show later that evening at 7:30 nearby at ASC’s Richardson Auditorium on Edgemont Ave. near Main St.  and between Richardson Ave. and Edgemont Ave, on the ASC campus. Tickets for Larget-Caplan’s earlier show are $10 for ALMA members, $12 for the general public.

With performances in Spain, Italy, and on both US coasts as a soloist and chamber musician, guitarist Larget-Caplan is a unique performer and communicator, juxtaposing new and traditional repertoire into exciting and thought provoking shows. Raised in Colo., Larget-Caplan made his debut at the Tabor Opera House at 17, and later graduated from the New England Conservatory where he studied with world-renowned guitar virtuoso Eliot Fisk, prize-winning guitarist David Leisner and flamenco master Juanito Pascual. He currently lives and teaches in Boston, Mass.

As a chamber musician, Larget-Caplan has performed many of the world’s great ensemble works, including pieces by Igor Stravinsky and Astor Piazzolla. His programs are educational, entertaining, and a great way to introduce classical music from Spain and Latin America. 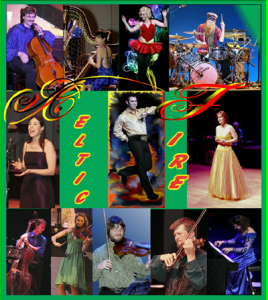 Celtic band FEAST brings their Irish St. Patrick’s show, “Celtic Fire,” to Alamosa’s Richardson Hall, later that evening, Sat., March 19, at 7:30pm. The show features explosive, high-octane, toe tapping, Irish music and dance, featuring Ireland’s hottest new champion dance duo from Dublin. Tickets are available online at www.CelticFireTix.com, and at the Narrow Gauge Newsstand. Tickets start at $19 in advance and $22 at the door for adults, $9 for children 12 and under. All seats are reserved.