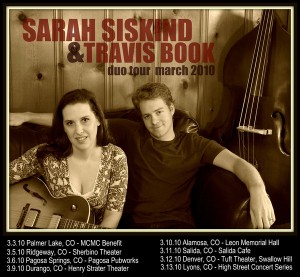 A masterpiece,” is what Bonnie Raitt called Sarah Siskind’s “Say It Louder,” and the Nashville Music awards named it “Americana Album of the Year,” for 2009. Siskind will perform songs from that album, as well as others, with bassist Travis Book in Leon Memorial Hall on the Adams State College campus in Alamosa, Co., Wed., March 10 at 7:30pm, courtesy of the Alamosa Live Music Association (ALMA). Tickets are $8 for ALMA members, $10 for the general public, and $5 for students and seniors.

Alison Krauss, Randy Travis, Bon Iver, the Infamous Stringdusters and April Verch are among the artists who have recorded Siskind’s songs. Krauss released two Siskind songs as singles, and her rendition of one was nominated for a Grammy in 2008.

Although Siskind has been making records since the tender age of 14, including one that featured world-renowned guitarist Bill Frisell, “Say It Louder,” has been making the biggest splash among fans and critics alike.

“One of the best records ever made,” is how “Big Al” Anderson, former NRBQ guitarist and hit songwriter for Trisha Yearwood and Rascal Flatts, among others, described it. “Sarah’s music changed my life,” according to indie-rock sensation Bon Iver, who has been covering Siskind’s material live. National Public Radio named the title track of “Say It Louder,” song of the day in June. CNN also spotlighted Siskind in an interview about the album.

Armed with a striking vocal sound of her own and sharp musicianship, the respect Sarah has garnered as a songwriter and an artist in Nashville has quickly spread across the country and beyond.